Every year I try to take progressive pictures of my 'Bulb Garden'. It's not strictly bulbs, there are a few Rose Campion plants, and last year saw the addition of some Leopard's Bane and Iris.

3-21-10 A few Crocuses and Snowdrops; nothing spectacular. I think I will need to buy some more of both this fall. 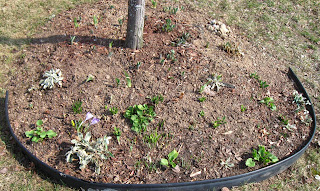 4-11-10 The Hyacinths were on their way out at this point, but you get an idea of how they looked. 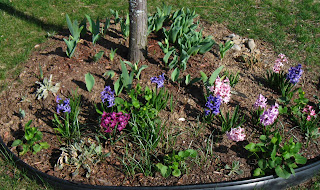 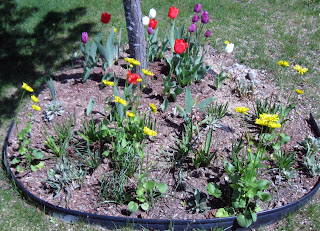 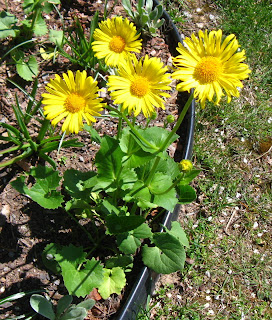 You may have noticed that although the pictures are taken from the same spot, the hues are different. I always have difficulties photographing this garden. I've been experimenting with different features on my camera, but have yet to find the perfect combination that shows the flower colors and foliage accurately.
Posted by Sarah at Thursday, April 29, 2010 3 comments: 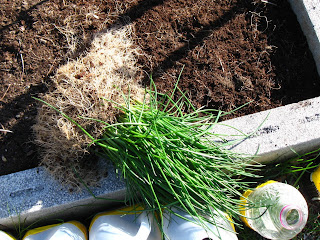 Last fall, Mom and I finally got some Iris and Hostas out of their "temporary" (they've been in there since we moved in 2005) bed, and turned the bed into an herb garden. This garden is right against our shed, and in the shadow of the house. This will give the bed part sun. A couple of weeks ago I moved the chives out of my veggie garden, and put them in the herb garden. I have some other herbs in pots, but I want to wait a few weeks before putting them in the ground. 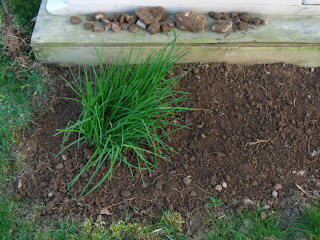 I couldn't believe the size of the roots! See all the rocks on the wood ledge? They all came out of the hole I dug for the chives.
Posted by Sarah at Sunday, April 25, 2010 2 comments:

As we have been doing for several years, my Grandma and I went to the Gardenscape show in March. I was concerned about a) forgetting my camera, and b) the camera batteries dying halfway through the show. I removed the batteries from my camera, and grabbed a couple extra batteries, and put them in my battery charger. Guess what? I remembered the camera! However, the battery charger was still plugged into the wall at home. I took a few pictures with the camera in my cell phone. They're not great, but they're better than nothing. 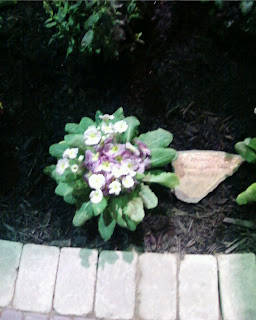 I'm 95% sure that this is an African Primrose. 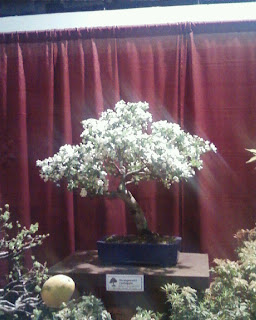 Flowering Pear in the Bonsai exhibit. 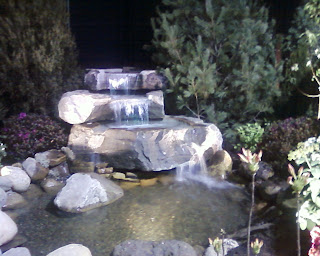 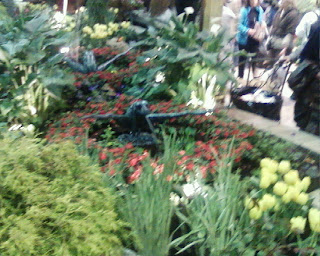 The frog was rotating....why I don't know. I think it may have been part of a water feature.... 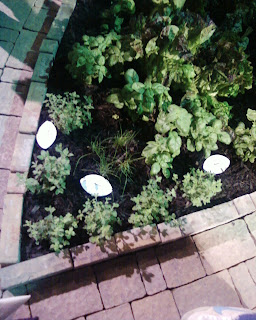 This display was about herbs and veggies. I liked the way the herbs were arranged in this picture. 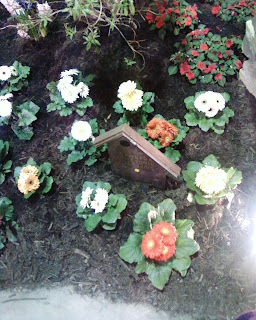 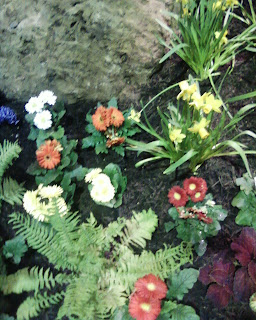 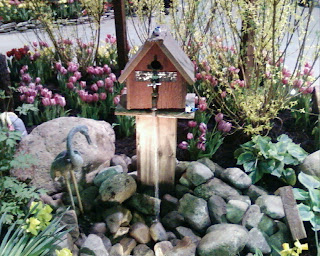 This garden had interesting things on birdhouses in place of pegs. This one was actually a fountain.
The garden show wasn't quite as interesting this year. Hopefully next year will be better. I did enjoy getting to spend an afternoon with my Grandma, though!
Posted by Sarah at Thursday, April 15, 2010 No comments:

Giving My Blog a Makeover

Nearly every week I think to myself 'I should really do something with my garden blog.' Sometimes I take pictures of plants and think 'I should really post these on my blog.' However, for all that thinking about blogging, it never seems to actually happen. A couple of weeks ago Blogger sent me an email about their new template designer. I thought that just might be what I need to get this blog going again. I've never been completely happy with the way this blog looks. I have always had a picture in my head of how I want it to look, but could never find a template. I tried to create a template, but the HTML didn't quite click for me. Someday I'll take a class in web design and design my dream blog. 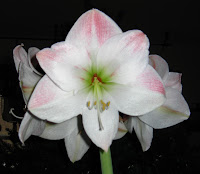 Today I spent most of the afternoon re-designing this blog. I'm happy with it, it's not perfect, but it works. Please let me know if you find any broken links, or something isn't loading properly, or the colors are too hard to read.


If you're looking for my tag cloud, it's below the posts. The posts are limited to 3, but I may make it 2 if it makes the page too long. Blogroll, Archives, Followers, and a few other things are now in the footer. I've added the page list feature, and am planning to make a few pages. Someday.
Posted by Sarah at Monday, April 05, 2010 4 comments: